As you all know, I’ve been doing a lot of work over the last couple of years to find me: what makes me happy, what I want out of life, and what work I want to do.

I’ve learned the importance during this process of setting intentions. In addition to setting long-term goals, this also includes choosing to be happy in every moment, regardless if I’m doing something I enjoy or not.

I don’t love the paid work that I do, however, I find something every single day that I can do that I draw enjoyment from. This could be anything from taking a few minutes to talk to a coworker to help them with an issue or to achieve a professional goal.

I’m still evolving and working through decisions that will frame out my life. Instead of being overwhelmed by the fact that the decisions I make now will impact my upcoming years, I focus on making sure that the many small decisions that I make regularly are in alignment with what I really want.

One of my priorities in my life is my nephews and I wrote about them not too long ago. I had considered moving to Colorado to live near them a while back, and decided not to for many reasons.

I’ve now decided what I want to put out to the Universe, the intention that I want to set: within the next two years, I want to find a way that I can live in Colorado part of the year. I want to be a regular part of my nephews’ lives, but I just don’t want to do winters in Colorado. After growing up in the Boston area, I know what that’s like all too well. So, this to me is the perfect compromise.

The mountains are a place of solace for me. I love hiking for the exercise, the views and clearing head. Being in Colorado makes sense, and spending time with my precious nephews brings me joy.

It seems a perfect match.

Ok, so it’s now out there! It’s official. Now is the fun part: I need to act on that intention with every decision that I make going forward.

Last week I wrote a post about judgment. I don’t believe my pup should be judged because he’s a pitbull, and I am a huge supporter of the breed because they are so badly maligned by the media. The post got me thinking about judgment in general.

I recently had a conversation with two friends about a couple divorcing after more than 35 years of marriage. I’ll call the couple Mark and Sharon. One day, Mark opened a conversation with Sharon that he fell out of love with her years earlier, and doesn’t want to be married anymore.

According to Sharon, the conversation was a complete shock.

Apparently, Mark had initiated the process without Sharon’s awareness, and had already drawn up papers splitting their things, their financials and their life 50/50. Weeks later, she learned that he had starting dating an old high school friend a while earlier.

I was talking with two of their friends, and they had strong feelings about Mark and his behavior. They felt that while the personal relationship between their neighbors wasn’t really their business, they did feel strongly that Mark’s behavior was hurtful, and it impacted their relationship with him. “If he could behave like that to her, then he’s a bad person, and we really don’t want a continued relationship with him.”

It got me thinking about judgment, and how our behavior and our decisions influence the perception others have of us.

Several years ago, a friend told me that I’m very judgmental. At first I was surprised, but as I thought about it, I believe he was right. Growing up in the family I did, I had to learn to quickly evaluate to see if I was safe. I learned to sense emotion strongly and to judge situations. Old habits die hard, and I suppose I do judge people to determine if I will feel safe in my relationship with them, based on their behavior. I don’t do it consciously usually, but he was right. I do judge people.

I’ve had the same thing happen to me, where I was the recipient of someone else’s judgment. I was working at a job with a bully. There were several instances of inappropriate behavior, and then I got smacked in the face with it: in a meeting with 12 other people, he started screaming at me and threw me from the room.

I was shocked. I had never encountered this kind of behavior in a corporate setting, and immediately called a meeting with my boss and Human Resources to address it. This was the third similar instance of this behavior.

Months later, I was given two weeks notice that I was being laid off, mostly due to this and repeated incidents with my peer and the damaging things he said to my manager.

I learned that he was doing something extremely inappropriate which threatened the security of the company, and he was stupid enough to publish it in a instant message group that he invited me to.

I reported it. He got fired.

I told my friend about it, and she told me that she thought what I did was awful and that she could no longer be friends with me.

Was what I did wrong? I’m not sure. What I did was right for the company, however, in truth, my intentions weren’t about the company at all.

So, is it right to judge people based on their behavior? And just because someone behaves in a poor manner in one part of his life, does that mean he is a bad person?

I love my dogs. Anyone who knows me knows that very well. A couple of years ago, I decided to merge two activities that I love together—volunteering, and being with my dogs. I got two of my dogs certified as pet therapy dogs, and I take them volunteering at Chrysalis, a family crisis center, through Gabriel’s Angels, and to a senior group home with Hospice of the Valley. I love both of these organizations and the amazing work that they do, and really cherish the time with my dogs. I take out their vests, and they start to sing and dance with excitement to go to “their job.”

One of my therapy dogs is a pitbull mix named Che. I brought him to Chrysalis last week to “work.” The visit started as they always do. We went into the office first so Che could love on the staff, and then spent some time with some of the moms before going to see the kids.

One of the mothers was walking with her son, and when she saw Che, she grabbed her son and backed away.

“Is that a pitbull? They are bad dogs. How could you bring him here?”

Recognizing an education opportunity, I responded. “No, pitbulls are not bad dogs. Judging a dog by their breed is in my opinion, the same as judging a person by their race. If an animal is raised with love, they will interact with others with love. Che is a really good dog, is well trained, and was certified to be a therapy dog because he is very social and well mannered.”

She visibly reacted to my response, thought for a minute, and said, “I’m so sorry. I had no idea. I have always heard that they are bad dogs. I need to think about that.”

I told her I really appreciate her willingness to reconsider, and that if she wanted to meet Che, he would love to meet her.

We went in to see the kids, and I saw the woman talking to her son before he went into the room. He didn’t engage with Che a lot, though he did go over to him to pet him a little bit. 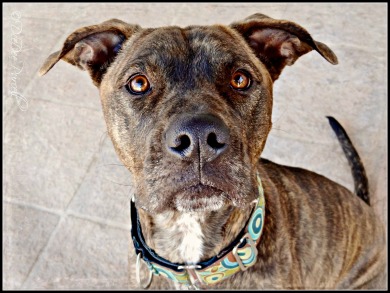 After we were done and walked out, the mother was in the lobby area. She came over and asked if she could meet Che.

Che was all too thrilled to meet her.

We all judge people to certain levels based on what they look like, how they are dressed, how they speak, and in other ways. Is it right? Maybe, maybe not.

Che would tell you he’s just a dog. He’s not just a pitbull, but a dog. A wonderful, happy dog filled with so much love for everyone and everything. I love that about him.

He doesn’t judge people because they judge him. What a beautiful lesson.

The top two photos are by DeeDee Purcell, 2013.

I have a pretty good life. Sure, there are things I’ll change, but overall, I’m very lucky.

On Saturday night, I went to my car after an enjoyable dinner with a friend to find several issues with my car, indicating a possible electrical issue.

I live in Phoenix.

I call Phoenix HELL this time of year, for obvious reasons. It’s August, one of the hottest months of the year, and temperatures are over 110 degrees during the day, cooling to balmy 90s in the evening.

I’m driving with the windows down, praying for a stream of green lights. And it happened Saturday night, which means I can’t even bring it into a mechanic to evaluate until Monday.

So on my drive home on Sunday, I got to thinking about my life and all of the wonderful things that I should be grateful for, instead of focusing on the fact that I might just melt into a puddle before making it home.

On Sunday I had a great time at the dog park with my pups, before it got too warm out. Then I went to support a friend for her yoga practicum, after which she will receive her certification to teach yoga. Yay! And in the afternoon, and the height of the heat, I went to visit Florence Crittenton, a therapeutic group home for teens that I have visited for over four years now, every Sunday. Two of the girls ran over to me to give me a welcoming hug. Anyone who has been hugged by a teen knows just how wonderful that feels.

I got to thinking about what’s important to me. I was feeling a little sad that I might need to get rid of my car that I’ve had for over ten years. It was the first car I ever bought that I really enjoyed, and I still love driving it. But even my cute little sports coupe, my “I’m thirty and single and going to buy the cute little sports car now before I am a cliché at fifty” is just a thing. I do have some attachment to it, but it’s something that can be replaced.

It’s when I think of losing something that I realize just how important it is. The most precious things in my world are my two nephews, Mason and Sawyer. I am so grateful that they are in my life.

Thank you for the reminder.

Explore the world outside your comfort zone

In Memory of (and in promise to) Michael Todtenkopf (Myke)

Evolution of An Entrepreneur
Healing for Good Girls
zen habits